When Joey’s sister Kayla mentioned to one of my Facebook friends from college that her brother was planning to elope in the mountains, my Facebook friend recommended that they reach out to me from her seeing my work. Who knew that an adventure elopement in Glacier National Park would bring together three class of 2016 graduates from a small-town college in Virginia?! We didn’t know one another while attending Longwood University but it’s so awesome that we met in this capacity thousands of miles away from college and five years later.

Sending a brainstorming questionnaire is something that I love to do for each and every one of the couples that I work with to guide them through planning their day. When Jessie and Joey filled out theirs, it was apparent that when thinking of their adventure elopement in Glacier National Park that it was really important to the both of them to spend quality time with their family as well. This is why we chose to split their day into two parts and it ended up being perfect to say the least!

The story of their elopement day

It rained off and on the night before their adventure elopement so the morning of there were so many clouds around Lake McDonald and it made for the most beautiful and serene setting for their first look, portraits, and ceremony! Jessie was glowing in her dress and I couldn’t get over how Joey smiled when looking at her.

When we arrived at their ceremony site and handed the officiant the ring bag, we came to a scary realization… there were only two rings instead of three! Jessie’s engagement ring was missing. We frantically headed back to the last spot that we had it (a turnout about 5 minutes down the road) and searched and searched and searched with no luck. A few ladies joined us and mentioned that if they found anything, they would bring it up the road to us.

Morale was a little low when we returned to the ceremony location empty handed until a silver truck comes flying down the road with one of the women leaning out of the window exclaiming that they had found the ring! What a miracle! Both his mom and one of the women in the car exclaimed that they had been praying to Saint Anthony for us to find the ring and happy tears spread around everyone. Nothing like losing and finding your engagement ring to break the ice on your elopement day, right?!

Their officiant, Sarah, put together the most beautiful ceremony for the two of them that did an amazing job of honoring their relationship and the beauty of saying “i do” in Glacier National Park. After their ceremony, we did some family photos and then headed back to their cabin for a breakfast picnic lunch and good conversations!

Joey, Jessie, and I regrouped in the evening (after naps of course) to finish their adventure elopement with one of my favorite hikes in Glacier National Park. Although there was some mid-day rain and thunderstorms, all of that cleared just in time for us to begin hiking through the forest to the most beautiful alpine lake. Jessie’s dress had so many layers and fluff that she opted to pack it in their backpack and change into it once we reached the lake! We had quite an interesting time trying to decipher the directions to fold it back up, but what’s an adventure elopement in Glacier National Park without mini bumps in the road to make the memories all the more exciting?! There was a beautiful glow on the mountains and I had such a blast capturing the two of them with such a beautiful back drop.

Cake and Campfire at the Cabin

We started the hike back to the car before it was too dark so that they could return to the cabin for more celebrating with a beautiful cake and a campfire with their parents and Joey’s sister. It was a beautiful clear night and although it was a bit chilly, being near the fire made it feel much much warmer. 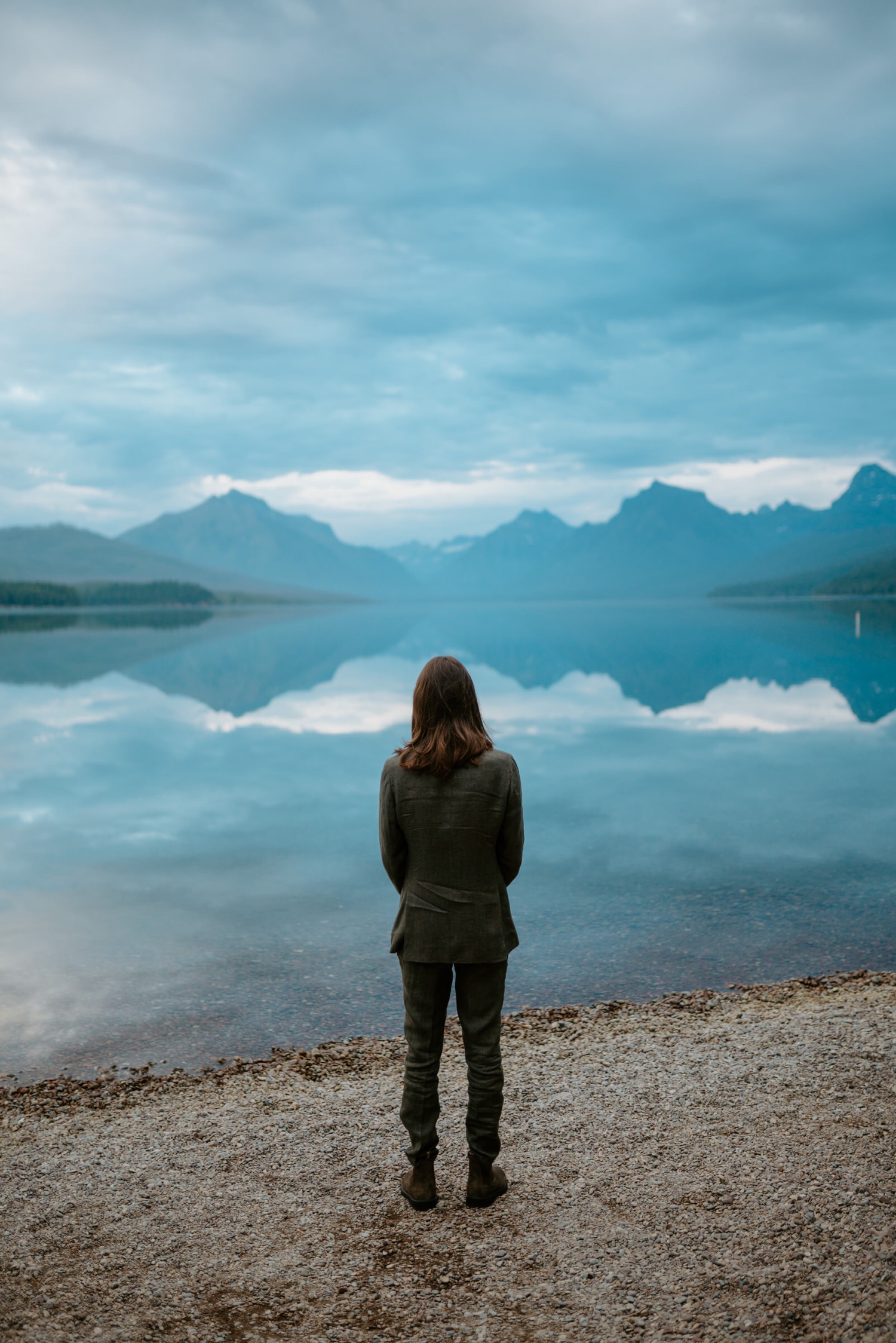 Vendors that made their elopement day possible:

Want to have your own adventure elopement in Glacier National Park?

I have a few amazing resources to start your journey including: best hikes for your adventure elopement, 7 steps to planning your elopement, and where to elope in Glacier National Park. Of course, if you want the best of the best in terms of information from me and planning – I’d love to be your elopement photographer! Inquire by filling out the contact form on my contact page or visit my Glacier National Park elopement page for more information about pricing and packages.