Kristen and Alex first reached out to me about their spring elopement in Glacier National Park in March and in no time we were getting everything in order for their Montana elopement trip in May – less than 2 months away! After months of being cooped up due to the pandemic, both of them really wanted to have an elopement experience to get out of the hustle and experience the beauty of Glacier National Park together.

The day of their elopement was a Glacier National Park elopement photographer’s dream to say the least, but not because of the photo ops and the moody environment. Kristen and Alex’s elopement day was simple in the most special way – they both just seemed comfortable with one another and with being present and experiencing their day together.

On the morning of their elopement day, I met them before sunrise at the treehouse Airbnb they rented for the nights around their elopement. They were both relaxed and I loved capturing each of them preparing for the morning ahead – Kristen in the downstairs area of the treehouse and Alex in the upstairs. When they both had finished getting ready, they did a first look on the front porch and we headed into Glacier National Park for them to exchange vows and explore the scenery. Although the sky was crystal clear in Columbia Falls and the areas outside of the park, as we got closer we realized that there was some sort of cloud inversion causing a layer of clouds to sit over Glacier National Park. The clouds may have prevented the views of the lake from being as visible, but they definitely only helped them get beautiful photos that really showed off the coloring of Lake McDonald – overcast skies are seriously a photographer’s best friend!

After their ceremony and some time exploring in the park, we went back to the treehouse for them to enjoy a cup of coffee with one another and to really capture the beauty of where they were staying in the daylight. All in all, I had the absolute best time being Kristen and Alex’s elopement photographer – it was wonderful to go with the flow alongside them, help them craft a day that was really true to who they are, and, of course, capturing it all the day of. 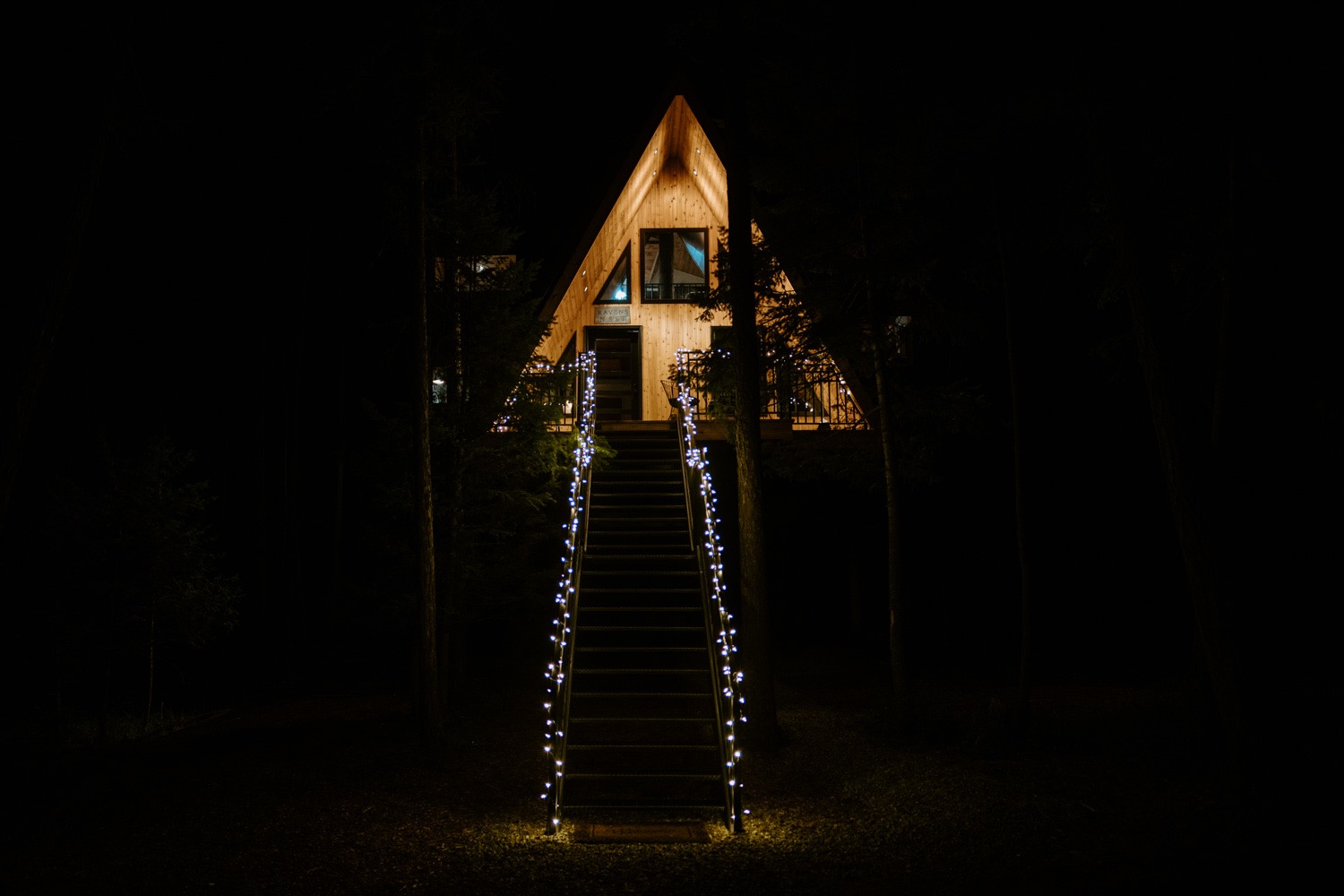 Did you know that when planning an elopement in Glacier National Park, it doesn’t require several months of planning (and waiting to say “I do”)?! Although for “prime travel months,” like June through October, I recommend reaching out to your favorite elopement photographer ASAP, there’s often a bit more flexibility in the “off season” of November through May.

More information about the treehouse they stayed in

Being a Glacier National Park elopement photographer, a spot that I always eyed and thought would be epic for couples to stay in was Montana Treehouse Retreat – so imagine my excitement for them when on one of our planning calls, they announced that they had secured it for the night-before and night-of their elopement day! The Meadowlark Treehouse has been featured on DIY Network, HGTV, and in Outside magazine – so being able to book a stay is definitely something that requires a little bit of luck and watching for cancellations if you can’t book in advance, which made me all the more stoked for them.

There are so many neat Airbnbs near Glacier National Park, but this one is definitely a one-of-a-kind experience and I hope to snag a stay for myself there one day. There are two different treehouses that you can rent on Airbnb; the original treehouse is the Meadowlark Treehouse and the Raven’s Nest Treehouse is one that they more recently built.