Danielle and Brent’s intimate West Glacier elopement ceremony took place along the cloud-covered shore of Lake McDonald in Glacier National Park. Their entire day was laid back and beautiful and I’m excited to share a glimpse of their story with you!

We watched the forecast for about 10 days leading up to their intimate elopement and everything was showing that heavy rain (and maybe even a thunderstorm) was inevitable in Glacier on the day of their elopement. Danielle was a little concerned, but we came up with a game plan (including rain ponchos and umbrellas) to ensure that no matter the weather – their wedding day would go off without a hitch and without any stress.
Funny story (when is there not at least one?!) – before going to their rental for getting ready pictures that morning, I decided to head to Target to see if I could pick up at least a couple more clear umbrellas just incase our combined stockpile wasn’t enough. Real talk – it was probably the only time that I didn’t get distracted by the dollar spot. I quickly made my way to the umbrella area, grabbed one, and then while I was deciding which one would be most appropriate – a group of 4 guys sprinted to where I was and literally snagged all of the remaining umbrellas. Although I was a little shocked, I assumed they were on a mission and didn’t think much of it at first.

As I was pulling into the driveway of the beautiful house they rented outside of Kalispell – it hit me that it very well could have been Brent (the groom) at Target! When I asked Danielle if that could’ve been him, we got a good laugh about their determination and I was super happy that it was my couple that hit the jackpot on the clear umbrella stock that day!

The craziest thing happened before we left – we were looking at the weather and radar one last time only to realize that the heavy rain and thunderstorms that had been looming all week had disappeared and the only thing in the forecast was off and on drizzling – how perfect!? Of course, we still brought the 10 umbrellas we had gathered between us but it was magical to see the way the weather had shifted. So, we gathered up the gang (umbrellas included!) and headed out to get married.

A question I get asked often is how exactly we coordinate a first look for intimate weddings and elopements in Glacier National Park – the answer is quite simple really! First, Brent, his best man, and Danielle’s brother loaded up in my car and we led the way into the park with Danielle tucked away a few cars back. When we arrived, I guided Brent to the perfect spot along the shore and then Danielle came to meet him where he stood. Oddly enough, a park visitor came and stood right next to Brent to take photos of the scenery so we had to scoot him a little last minute. I guess some people are more used to seeing guys in suits in the wilderness than others. When they saw each other, it was such a beautiful moment and you could just feel any nerves from the day melt away. That view from behind the camera never gets old!

Danielle and Brent’s best friends put together a heartfelt ceremony for them where they said wonderful things about their past, their present, and their future as husband and wife. I’m already a sucker for handwritten vows – but listening to their two best friends words hit me in the feels in an entirely new way. It’s always so fun to see what each couple will add to their ceremony to make it unique to them and their relationship. This one was so touching!<

We celebrated their marriage by popping champagne and devouring some yummy cupcakes, after taking some family photos, of course. I love how fun the champagne pictures turned out and, maybe it’s all the NASCAR I watched as a child, but something about the spraying pictures always has me cheesin’ hard

Next stop after a few pictures of just the two of them was dinner! Y’all – I had never been to the Belton Chalet but let me tell you, it was such a neat place filled with history and it literally felt like I was stepping back in time the moment we walked in the door. The chalet had a beautiful private room where we enjoyed dinner, desserts, and toasts to the new Mr. and Mrs! Their family welcomed me throughout the day as if I was one of them and it meant the entire world to me to have such a wonderful connection with not only the couple but their family and friends as well.

With our bellies full – Danielle, Brent, and I headed back into the park for a little bit for more pictures before their intimate elopement day was complete. I absolutely love the look of the overcast skies and the moodier vibes it gave their elopement photos. No matter the season or the weather, I truly love all of the “looks” of Glacier National Park. No two trips to Lake McDonald look the same, no two sessions have the same colors or lighting – and I love the adventure of it all.

While we were wrapping up the session, Danielle mentioned getting in the water. Of course I did a little shriek, clap and said let’s do it! She knows me all too well. I absolutely love the detail photo of her dress and the rocks. The contrast of the beautiful human-made lace and the rocks of Lake McDonald is amazing and I absolutely adore all of the photos that I captured of their elopement day. If you’re ever contemplating hopping in the water after your session, the answer is yes. The answer is ALWAYS yes. 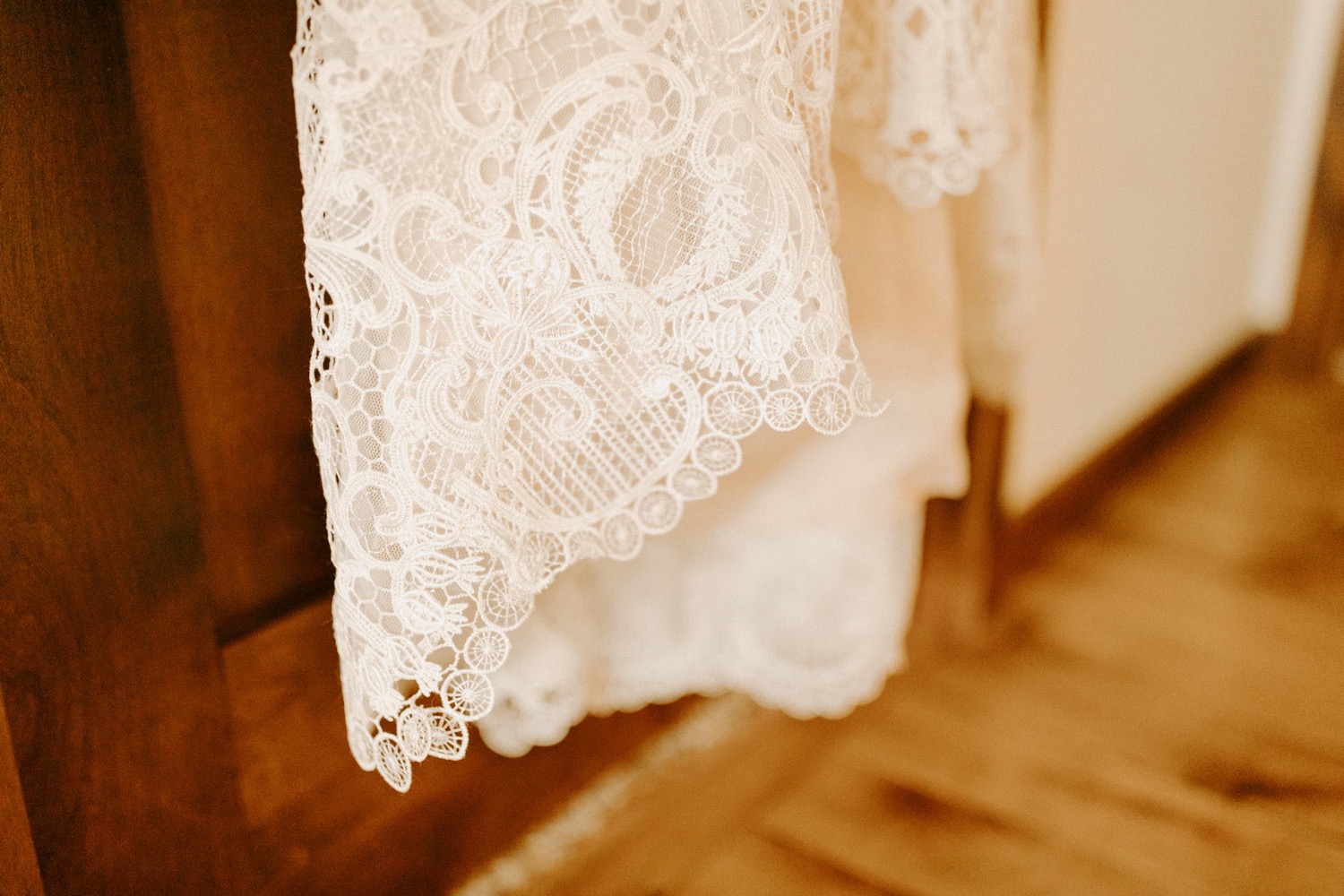